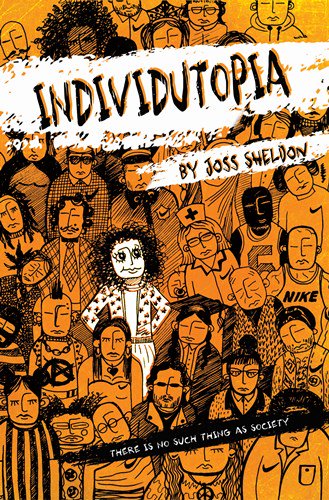 Those that know me are very aware that one of my most preferred genres are dystopian and post-apocalyptic novels. The other day, while I was going through my email, I found an email by author Joss Sheldon. He told me that he was going to release a new book (August 23) and if I wouldn’t mind checking it out and reviewing it? He also said that it was a dystopian novel and that it was in the likes of George Orwell’s 1984.

So I received and eBook ARC (out on August 23), but I was reading another book on my Kindle. Yes, I  do tend to read more than one book at a time, I’ve been trying really hard to keep it at three at a time (a physical copy, an eBook, and an audiobook), so I put this one aside (I’ve already failed in trying to just keep it at 3, but I’m trying again). When I finished reading the book I had on my Kindle, I decided to start reading Individutopia, but as I was about to start, I got an idea! “Hey, it would be great to do a blog post about this book. It’s not out yet (out August 23) I think I’m going to have to ask Joss if it’s okay to do.”

I then decided to send Joss an email asking him this and he said that it would most certainly be okay just as long as I say that it’s out on August 23 (I hope that people are aware that it’s not available till August 23). I put on hold reading the book until I got word back from Joss. I got a reply the following morning and thus began my reading of this book (which is out on August 23). Well, enough small talk and let’s get to what everyone’s here for: Tacos! Oh no, sorry. I shouldn’t type while I’m hungry; y’all are here to read about my review of Individutopia by Joss Sheldon (out August 23).

“THIS IS NOT A PROPHECY THIS IS A WARNING”

As I was about to begin reading the eBook, I turned the page and I bump into this. This really got my attention right off the bat and I remembered that Joss had told me that it was in the style of 1984. I was hooked right away even before starting to read the story which is an amazing sign of an awesome book.

So the book starts with the narrator talking about the things that happened that led them to where they’re at, the year 2084. I found this quite disturbing as I see that some of these things are happening already. This is one reason why I find dystopian novels so fascinating, when they implement things that we, humans, are doing right now into the story. What I find more amazing is when they predict the things and they do happen almost like how the author predicted, this is why 1984 is one of my all-time favorite novels.

The narrator describes a world where society is done away with. Everyone is mainly focused on the individual self and people no longer say the words “us,” “they,” “you,” or “we.” As technology evolved, people were left to fend for themselves. Since there is no more society, there’s no such places such as pubs, community centers, and such. People rely on just their electronic devices and monopolies are fully established, such as Amazon and Nike. Marriage is very rarely heard of and reproduction is kept to a minimum, and the human population has decreased.

People are charged for everything they do, yes, even breathing and going out for a walk (you get charged for each step someone takes). They also have contacts designed to block the images of other people replaced by computer screens. Because of the minimal human interaction with each other, mental health diseases have dramatically increased. So much that the water and air that they breath is infused with antidepressants and antianxiety medications. They even have sex with robots instead of other people! This reminded me of another dystopian novel that I think is brilliant as well, Aldous Huxley’s Brave New World.

The reason why I say that it reminded me of Brave New World is because in that novel, government uses drugs to control the population and make them feel more comfortable, hence the antidepressants etc.

As I read the first chapter, I think it’s safe to say that Joss can easily say that it’s also in the style of Brave New World as well. The book has a lot of weird sayings, like in Brave New World, and what also reminds me of it is that instead of using the Lord’s name in vain, they use themselves. In Brave New World, they use the word Ford (“Oh my Ford!”). I believe that in Individutopia, people use themselves in vain to curse because everyone is focused on the individual self so much that they’ve made themselves a religion. They only believe in themselves and what they can do. This I don’t believe, but I know as the story progresses.

I think I gave you enough of the beginning. This story is pretty exceptional! It also reminded me of another of my favorite dystopian novels, Ernest Cline’s Ready Player One. I think, however, that this story might anger some conservatives, but the message is so powerful that it’s hard to not see it. This is a pretty awesome book and I’m so glad that I was given the chance to read and review it. It’s especially an honor to be able to do a blog post about it.

I believe that, in the end, this book teaches us that we have to try to free ourselves from being slaves to social media and our cell phones. To put our phones, tablets, and/or computers down and see the world as a whole and to help one another. I also think that it also tries to tell us that life gets a little bit harder to try to think for yourself, but the work is worth it and that we’ll be okay in the end, even if it feels like we’re failing. To open our eyes and understanding, and to think outside the box that society tries to teach us. This is one hell of a book and I really enjoyed reading it! So in the end, I believe that this book is in the likes of George Orwell’s 1984, Aldous Huxley’s Brave New World, with a bit of Ernest Cline’s Ready Player One.

I must say, there was like one or two things that happened that left me open mouthed and surprised. In the end, I’m going to give this story a rating of 🐕🐕🐕🐕🐕, yes five 🐕’s cause of what is one of the most disturbing things in this book. 😳 Are you intrigued? Well pick up this book when it’s out. I think its out on August 23, but I’m not too sure of it. 😝

I’d also like to try to interact with some of y’all fellow readers; do you enjoy dystopian and post-apocalyptic novels? If so, which are your favorites? Do you have any recommendations you’d like to give? How much wood would a wood chuck chuck if a wood chuck could chuck wood? And most importantly: What would you do for a Klondike bar?

This blog was created to stop bothering all my Facebook friends that don't really care about reading books nor what I'm reading. Also to discuss the books I'm currently or had read. I also like to give reviews on books so if you'd like for me to check out a book, or your book, I'll gladly read it. I love to read, I have become a Bibliophile!
Follow Ivan The Black's Book Emporium on WordPress.com